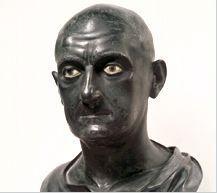 oxford
views updated
Scipio Africanus Major (236–183 bc) ( Publius Cornelius Scipio) Roman general in the second of the Punic Wars. He defeated the Carthaginian forces in Spain in 209 bc. Elected consul in 205 bc, he invaded North Africa with a volunteer army and defeated Hannibal at Zama in 202 bc, earning the honorary surname Africanus. He was again elected consul in 194, but later retired from public life, disillusioned by attacks from opponents jealous of his popularity.