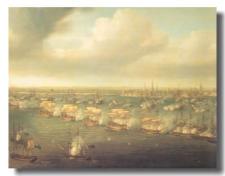 oxford
views updated
Copenhagen, battle of, 1801. This encounter with the Danish fleet was fought on 2 April in the narrow 3-mile-long King's Channel, of varying depth, which bounded the eastern defences of the Danish capital. These consisted of the formidable Trekronor fort, flanked to the north by 5 moored warships and to the south by a redoubtable line of 7 unmasted warships and 10 floating batteries, all moored, heavily gunned and manned. The British under Sir Hyde Parker with Nelson as his second had 15 ships supported by a variety of assault craft and 600 soldiers. Following a daring navigation aided by a southerly wind the British attacked in line and broke the Danish defence, Danes and British each sustaining over 1,000 men killed. Nelson ‘turned his blind eye’ to Parker's premature signal to withdraw. The victory was as much a blow at Russia, leading the offensive ‘Northern League’, Nelson showing all his chivalry in subsequent armistice negotiations with the Danes.

Douglas Haig 1st Earl Haig , Haig, Sir Douglas, 1st Earl Haig (1861–1928). Soldier. Before 1914 Haig was recognized as one of the outstanding soldiers of his generation. In Decem… Sikh Wars , Sikh Wars (1845–49), two conflicts preceding the British annexation of the Punjab. By a treaty with the British in 1809, the Sikh ruler of the Punjab… Battle Of Cowpens , Cowpens, Battle of (1781).Daniel Morgan and his 1,100‐man American army defeated Banastre Tarleton and 1,100 British and loyalist troops at the Cowpe… Horatio Nelson , Horatio Nelson The English admiral and naval hero Horatio Nelson, Viscount Nelson (1758-1805), was noted for his bravery and for his victories, inclu… Battle Of The Somme , Somme, battle of the, 1916. When he became commander-in-chief, Haig wanted to advance from Ypres to liberate the Belgian coast. However, the allies h… Battle Of New Orleans , New Orleans, Battle of On the morning of 8 January 1815, a sea of red coats rushed toward the American lines defending New Orleans. Within a few shor…