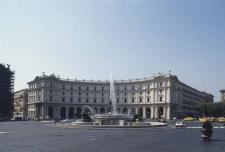 oxford
views updated
Quirinal one of the Seven Hills on which the ancient city of Rome was built. From the 17th century, Quirinal has also been the name of the summer palace of the popes on the Quirinal Hill in Rome, which later became the palace first of the monarchs and then of the presidents of Italy; later, the name denoted the Italian court, monarchy, or government, especially as distinguished from that of the Vatican.