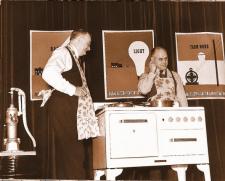 
One of the most important New Deal programs for farmers was the Rural Electrification Administration (REA). This program, authorized by Congress in 1935, lent funds to rural cooperatives to generate and distribute electricity to areas not served by private utility companies. The impact of electrification in such isolated areas was enormous. In 1936, 90 percent of U.S. farms had no electricity. Without electric power, farm families had to perform back-breaking work by hand. They had to draw water from wells or pump it by hand, which made it impossible to have flush toilets. They lacked refrigerators, electric lights, and washing machines. All the farm chores, such as milking, also had to be done by hand. And without electricity, there was no access to radio or telephone. Life for farm families was exhausting and lonely, and lack of electric power was a major cause of poor health in rural areas. The REA, despite strong opposition from private utilities, made it possible for cooperatives to provide affordable electric power to the rural poor. By 1937, the program had enabled almost a quarter of a million farm households to obtain electricity; by 1945, that number had increased to 40 percent of the country's farms. Electricity brought farm families into the twentieth century. Not only did electric power make their work easier and more efficient, it brought them into closer contact, through telephones and radio, with other parts of the country. In addition, electrification made it possible for farmers to improve their businesses after World War II by diversifying operations.