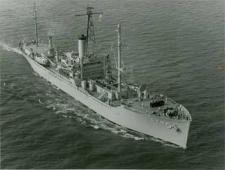 The Liberty Incident refers to the June 8, 1967, attack on the United States intelligence ship Liberty by Israeli Defense Forces. The Liberty was stationed near the Sinai Peninsula and charged with monitoring Soviet communications to Soviet Arab allies during the Arab-Israeli Six Day War. Israeli troops reported they were taking fire from warships and deployed aircraft to find the source of enemy fire. The planes found the Liberty and fired upon the vessel. Torpedo boats also seized upon the Liberty. The attack killed 34 Americans, wounded 171, and destroyed the American ship. Israeli forces claimed that they had misidentified the Liberty as a hostile ship and attacked the vessel in error. Although the event sparked controversy, the attack was soon ruled an accident.

The USS Liberty was a World War II-era freighter built in 1945. The vessel sailed in post-war operations in the Pacific until it was retired in 1958. At the height of Cold War tensions, the National Security Agency (NSA) refitted several older military ships, turning them into intelligence vessels. The Liberty-class ships were designed to track radio signals and monitor communications between the Soviet Union and its allies. The Liberty itself measured over 450 feet long and carried a crew of 290 military and intelligence personnel.

The Liberty, like other ships in the intelligence fleet, was not constructed to be a warship. Navy and NSA officials assessed the risk of the ships encountering hostile forces was minimal, since all were to conduct operations only in international waters. The Liberty carried minimal defensive weapons, with only four. 50 caliber machine guns mounted on the ship's deck. While the vessel was marked with its U.S. Navy identification number and flew an American flag, the ship maintained radio silence during most of its operations. Since the ships conducted operations in international waters, the American Navy rarely reported the position of its intelligence vessels to foreign intelligence services. Despite mission secrecy, the Liberty 's national origin and electronic surveillance capabilities could be ascertained by trained, careful observers.

The Liberty 's first mission as a refitted intelligence ship was monitoring radio communications off the coast of West Africa. As tensions grew between Israel and neighboring Arab nations, the Liberty was deployed to the eastern Mediterranean Sea. The vessel took on new personnel, including technical specialists and linguists trained in Russian and Arabic. However, no specially trained Hebrew language experts were assigned to the Liberty. The Liberty was stationed 13 miles off the Gaza coast, precariously close to Israel and Egypt, and in the middle of the developing conflict in the Middle East.

The presence of Soviet bombers in Alexandria strained U.S. relations with Egypt. As a result, diplomatic friendliness between Israel and the Unite States increased in an effort to halt Soviet backing of various Middle Eastern governments with military aid. The USS Liberty 's mission was to conduct remote intelligence, listening to radio transmissions, to ascertain the status of Soviet bombers and military officers in Egypt. As the ship began its mission, the Six-Day War erupted. Commander William McGonagle, Captain of the USS Liberty, requested a destroyer escort for his vessel, but the request was denied. Instead, U.S. Naval Command told McGonagle that jet fighter squadrons stationed on the island of Crete could provide rapid assistance if needed. A few hours later, U.S. Naval Command issued new orders to the Liberty to retreat further into international waters, 25 miles from the Sinai Peninsula. The Liberty never received the revised orders.

The Liberty remained in its location. Assured that the new orders had been received and heeded by the crew, U.S. military forces assured allies in the United Nations that no American vessels were present in the war area. On June 8, 1967, Israeli troops reported that they were being fired on from vessels at sea. Israeli intelligence deployed jet fighters to scout for Egyptian and other hostile boats in the region. Jet fighter scouts mistakenly reported to Israeli Defense Force Command that they located the Egyptian vessel, El Quseir, which had attacked Israel forces the day before. However, the planes actually reported the location of the USS Liberty, which they had misidentified.

Israeli forces swiftly attacked the Liberty with both jet fighters. The Liberty responded by turning its only weapons, the four. 50 caliber machine guns, on the assaulting forces. The Israelis responded by launching napalm canisters and torpedoes from warships. The Liberty broke radio silence and tried to contact Israeli forces to identify the vessel as an American intelligence ship. However, Israeli forces had jammed the ship's communications systems with extensive static. Finding an open channel, Liberty communications officers radioed U.S. air forces in Crete for assistance. Receiving the distress call, jet fighters were deployed to aid the besieged Liberty. However, U.S. military officials recalled the planes after discovering that the jet fighters were not equipped to repel the attack. Without defensive weapons or fighting assistance, the Liberty was quickly crippled. Crewmembers later reported that Israeli

The barrage ceased, and Israeli forces notified government and intelligence officials, that they had mistakenly fired upon an American vessel. The Israeli government reported the incident immediately to the United States embassy in Tel Aviv, and notified U.S. officials in Washington, D.C. United States Naval Command deployed nearby ships in a belated rescue effort. Before U.S. aid vessels arrived, Israeli and Soviet vessels in the area both offered assistance to the crew of the Liberty. McGonagle and his crew refused their aid.

Though the incident was shrouded in secrecy for numerous years, the U.S. government declassified most of the documents surrounding the Israeli attack on the Liberty in the mid 1990s. Though some people, including various crewmembers, remain skeptical about the motive and nature of Israeli military actions against the ship, the Liberty Incident was officially ruled a "friendly fire" accident. Volumes of documents and diplomatic evidence materials support this conclusion.

In July 1967, the U.S. Navy conducted the first official investigation of the Liberty Incident. The investigation team collaborated Israeli accounts that the ship was hastily misidentified as result of wartime stresses on military and intelligence resources. The inquiry noted relatively calm seas prevented the ship's flags from visible flight, and that jammed radios onboard the ship hampered communication. Furthermore, the Navy acknowledged that officials did not report the position of the USS Liberty to Israeli intelligence. Twelve subsequent, individual investigations, nine by the United States government and three by Israeli officials, concluded that the attack on the Liberty was the result of error. Israel officially apologized for the incident on several occasions, and paid $13 million in reparations. Despite the incident, the United States and Israel maintained increasingly good diplomatic relations. On December 17, 1987, the two governments formally closed diplomatic discussions on the incident.

The USS Liberty was not the only Liberty-class intelligence vessel involved in an international incident. The Liberty 's sister ship, the USS Pueblo was seized by North Korean forces while conducting surveillance missions in international waters off the Korean Peninsula.

On 8 June 1967 the electronic surveillance ship USS Liberty was 14 nautical miles north of al-Arish, Egypt, gathering intelligence data when it was attacked by three Israeli combat aircraft, and later by three torpedo boats, one of which launched a torpedo that demolished the Liberty 's communications room and killed twenty-five technicians. A Mayday message from the ship drew rescue aircraft from the carrier USS America, and Israel halted the attack. In all, 34 crew members were killed and 171 wounded.

Israel's attack has never been satisfactorily explained. The Liberty was displaying the U.S. flag very prominently and the attack continued after the ship had been identified by Israeli pilots whose conversations were monitored by a U.S. surveillance aircraft. Israel swiftly apologized for what it called "a tragic error." Although a U.S. inquiry found no evidence that the attack was premeditated, military experts concluded that it could not reasonably be attributed to error, and that Israel must have felt that the information being gathered by the Liberty could be so damaging that it accepted the risk of incurring the anger of the United States. Two possible explanations are (a) that Israel was "cooking" (intercepting and altering) messages between Egypt and Jordan in hopes of drawing Jordan into the war so that Israel could occupy the West Bank, and (b) that Israel wanted to conceal the true extent of its dramatic victory over Egypt in order to delay the imposition of a cease-fire. Israel paid $7 million in damages to the families of the U.S. crewmen but never admitted culpability. Controversy about the incident, which was frequently cited in the propaganda war between Israel and its critics, continued to rage for decades afterwards.


Bamford, James. Body of Secrets: Anatomy of the Ultra-Secret National Security Agency: From the Cold War through the Dawn of a New Century. New York: Doubleday, 2001.

William Eaton , BARBARY WARS The Barbary Wars (1801–1815) resulted from interference by the Barbary States of Tripoli, Algiers, and Tunis with U.S. merchant shipping… Pueblo Incident 1968 , █ ADRIENNE WILMOTH LERNER The Pueblo incident involved the 1968 seizure and hijacking of the USS Pueblo by North Korean military forces. The Pueblo,… Uss Cole , █ STEPHANIE WATSON On the morning of October 12, 2000, as the Navy destroyer USS Cole sat anchored in the Yemeni port of Aden, a small boat packed wi… Sigint , SIGINT (Signals Intelligence) █ JUDSON KNIGHT Signals intelligence, or SIGINT, is one of the four major forms of intelligence, along with human, imag… William Kidd , William Kidd Captain William Kidd (c. 1645-1701) was one of the most notorious pirates in history. He sailed the coast of North America, the Caribbea… Clipper Ships , To accommodate increasing overseas trade, North American shipbuilders developed fast sailing vessels called clipper ships in the mid-1800s. With thei…