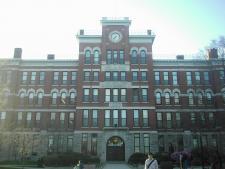 Sigmund Freud's only visit to the United States was in 1909, when he was invited by G. Stanley Hall, first president of Clark University in Worcester, Massachusetts, to deliver a series of lectures to celebrate the twentieth anniversary of the university.

Hall invited twenty-seven other distinguished participants, all of whom received honorary degrees, including the Nobel Laureates in physics Albert Michelson and Ernest Rutherford. But clearly Freud was the most important participant, in Hall's view; part of the celebration was delayed from July to September, the date Freud requested, so as not to interfere with his private practice. Hall also invited Carl Gustav Jung to participate, and Freud asked Sándor Ferenczi to accompany him. The three psychoanalysts thus sojourned from Bremen to New York on the George Washington. They spent a week in New York, welcomed by Abraham Brill, seeing their first movie, visiting Central Park, Chinatown, the Lower East Side, Coney Island, the American Museum of Natural History, and the Metropolitan Museum of Art (Freud especially enjoyed the antiquities). At the Psychiatric Clinic at Columbia University, near Riverside Drive overlooking the Hudson River, Freud experienced an embarrassing incident of urinary incontinence. Worried that he might experience another while on stage at Clark, Jung offered to help by analyzing the incident. Freud produced a dream, but the associations to it apparently became too intimate; when Jung pressed, Freud demurred, saying he could not risk his authority by such disclosures. According to Jung's account, this began the break between the two of them.

Freud was ecstatic by the invitation and by the prospect of lecturing to a distinguished American audience. After years of working in "splendid isolation" he found himself "received by the foremost men as an equal. As I stepped on to the platform at Worcester to deliver my Five Lectures on Psycho-Analysis it seemed like the realization of some incredible day-dream: psycho-analysis was no longer a product of a delusion, it had become a valuable part of reality. It has not lost ground in America since our visit . . ." (Freud, 1925d, p.52). In the audience were William James (he and Freud walked together and James suffered what was probably an angina attack from the heart disease that was to kill him shortly thereafter), Emma Goldman, and many other notables.

To be spontaneous, Freud delivered the five lectures without notes or extensive preparation; he simply talked with Ferenczi shortly before each lecture about the day's topic. Later, Freud changed the text somewhat before publication by Clark's house organ. Intending a general introduction, Freud discussed hysteria, repression and the talking cure, functions and interpretation of dreams, childhood sexuality, and symptoms. One of the great intellectual events of the century, the trip greatly stimulated the growth of psychoanalysis in the United States: the American Psychoanalytic Association was founded in Baltimore just two years later, years earlier than may have been the case otherwise.