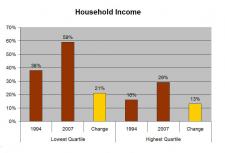 FEDERAL AID, the granting of financial assistance to the states by the federal government for a variety of reasons. Federal aid is often confused with federal subsidies. If subsidies are considered deliberate governmental interference with market processes for the direct benefit of a particular group—usually producers—then all subsidies are aids. On the other hand, not all aids are subsidies. Thus, the school lunch program is designed to benefit a particular group in the population, but its effect on food production and prices is secondary, like that of other welfare subventions. Furthermore, outright subsidies are often justified—sometimes remotely—because of their advantages to the public.

The granting of federal aid can be divided into two periods. Prior to the Great Depression of the 1930s, grants to the states of land, and money for canals, railroads, education, and roads, powerfully supplemented private enterprise and state resources for developments judged to be economically and socially desirable. During and following the Great Depression, the initial incentive was to relieve the distress of every segment of the population, and the assistance took on unprecedented variety and magnitude. Early instances of private philanthropy proved insufficient for the relief of mass unemployment, and then municipal capacity was exhausted, followed by the draining of state funds. Only national rescue prevented the hunger and homelessness of roughly one-fifth of the population and the collapse of agriculture, industry, and credit. Federal aid thereafter continued and grew in complexity and scale, often meeting needs that were hitherto untreated and leading to the reshaping of important sectors of American life. The expanded federal aid and all of its manifestations became associated with the notion of a welfare state.

Increased dependence by states and local governments upon the central government for assistance in many forms had several causes, but the primary one was the closer contact—physical, economic, and political—between all parts of the country. Mass production, as well as extended and faster transportation and communication, reduced regional differences. At the same time, federal revenue resources outran those of states, cities, and counties; large cities, in particular, had disproportionate demands for public expenditures. State and local taxes were on property and sales, and only occasionally income, which had been commandeered earlier by the federal treasury. The borrowing capacity of states and cities was limited, even with the creation of ostensibly autonomous administrative agencies, while the financial ability of the national government received no restraint from their mounting deficits.

Federal assistance takes the forms of cash payments, tax credits, payments in kind, and loans below the market interest rate. The objective may be to persuade recipients to take certain actions (for example, make capital investments) or to refrain from others (overproduction in agriculture, emission of industrial pollutants). Other aims are income redistribution, economic growth, price stability, employment increases, foreign trade balance, slum clearance and decent low-cost housing, health care, education, and efficient means of travel and transport.

In 1973, President Richard M. Nixon, alleging that some of the welfare programs were wastefully administered, proposed cutting them off from federal support, referring them to state and local maintenance where he believed they belonged. Congressional opposition and the Watergate scandal derailed Nixon's plans, but efforts to reduce federal aid and increase local and state control over spending prerogatives continued for the remainder of the twentieth century. The Republican Party, in particular, attacked federal aid as a wasteful and counterproductive governmental intervention in the economy. Many Republicans believed that Ronald Reagan's election to the presidency in 1980 would reign in federal spending and lead to massive cuts in federal aid programs. During the 1980s, however, federal spending on aid programs actually accelerated, and the federal budget deficit reached record highs.

Because federal aid disproportionately benefited the middle class, a critical constituency for both Republicans and Democrats, neither major party made a serious effort to roll back middle-class entitlement programs in the 1980s. Consequently, the welfare system, which benefited low-income citizens, became the foremost target of efforts to cut federal aid. During the 1980s, the Reagan administration attempted to cut dramatically the size of welfare programs, but encountered stiff resistance from congressional Democrats. Many state governments, however, implemented welfare cutbacks on their own, and, by 1992, the issue of welfare reform had become so popular that all the major presidential candidates endorsed it. In 1996, President Bill Clinton signed a welfare reform bill that reduced benefits and established a maximum of two years for recipients. Although the bill passed Congress with bipartisan support, its controversial nature set off an intense national debate over the role and extent of federal aid in general, and federal welfare programs in particular.

By the close of the twentieth century, the debate over federal aid remained unresolved. Indeed, despite welfare reform, the federal government continued to fund massive aid programs, the majority of which benefited the middle class. For example, federal student aid grew to unprecedented levels in the 1980s and 1990s. The relatively easy accessibility of federal loans for undergraduate students played a major role in the record number of Americans attending colleges and universities. Likewise, federal expenditures on Social Security and Medicare, the two largest federal aid programs, continued to grow at an enormous rate. For example, while the Food Stamp Program received $19,005,000,000 in 1999, that same year the Social Security Administration received $419,790,000,000 in federal outlays. Moreover, by 1999 federal grants-in-aid to state and local governments amounted to $229,300,000,000, a sum nearly five times as large as in 1974.