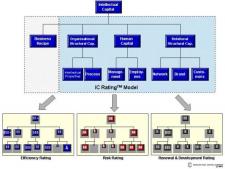 The nature of business activity in the United States changed dramatically during the second half of the twentieth century. Jobs in service-producing industries increased greatly. At the same time, manufacturing, farming, construction, and other goods-producing jobs fell. The U.S. economy underwent a basic change in the ways the labor force is employed. While earlier the most significant businesses were industrial enterprises, with the largest segment of the labor force involved in the production of goods, in the twenty-first century U.S. economy, employment in service businesses exceeds that of employment in the production of goods.

In service businesses, and even in industrial and retail enterprises, there is general recognition that astute knowledge management leads to innovation and value creation, and therefore company success. Within the workforce of a company reside the individuals who have the knowledge that represents intellectual capital.

Generally accepted accounting principles (GAAP), which establish what is recorded and reported in an entity's financial statements, ignore an entity's workforce as an asset and also ignore most of the other intangible assets possessed. The stock market analysts, on the other hand, appear to recognize such assets in determining a company's worth, as well as a company's future profit prospects. Companies in which knowledge is important, such as successful companies in the information processing and pharmaceutical fields, sell many times over book value, when purchased by other companies. Even successful industrial companies sell appreciably above book value, though not typically at the levels of companies where knowledge is critical.

The theoretical argument against current accounting is that the current model for reporting does not adequately measure and value the skills, information, and technological capabilities of the individuals in organizations, yet these factors are valuable to the progress of a company. Because of the significance of the unmeasured intellectual capital assets to the future of the entity, and therefore its market capitalization, current financial reporting lacks important informational content, sometimes even to the level of being misleading. Companies have been able to show accounting profits based on their tangible assets following GAAP, while their intellectual capital assets were losing value. Ultimately such companies did very poorly—their profits vanished. Good financial reporting should guide capital to the most promising investments.

The GAAP rules for a purchased subsidiary state goodwill is the excess of the cost of an acquired subsidiary over the sum of the fair values of all identifiable assets that are acquired, less liabilities assumed, that are acquired. Besides tangible assets, identifiable assets include any assets that are intangible assets and meet criteria that make them separable from goodwill such as they can be sold, transferred, licensed, rented, or exchanged or there is a legal-contractual relationship. Examples of identifiable intangible assets separable from goodwill are customer lists, customer orders, brands, and trademarks. If these components of intellectual capital are internally created, there is no means under current GAAP to place their value on the balance sheet. Research and development costs of the acquired subsidiary must be expensed. Goodwill, then, is a residual amount, frequently described as the value of the human capital acquired.

Finally, GAAP does not amortize goodwill because it is considered to have an indefinite useful economic life. Goodwill, however, must be considered annually for impairment. The implied fair value of the reporting unit is compared to its assets including the residual goodwill asset, less liabilities. If the implied current fair value of goodwill is determined to be less than the recorded goodwill, the recorded goodwill must be reduced or entirely eliminated. Because of business economic cycles there are sometimes very large write-offs of goodwill when there is a downturn in the economy and the stock market. It would appear that human capital would not suddenly disappear because of a downturn in the economy.

Financial reporting limitations have led to efforts to measure intellectual capital indirectly outside the financial statements. Such measures sometimes accompany the financial statements in reports to stockholders. These nonfinancial measures include information on such items as revenue percentage per employee, employees who have contact with customers, satisfied customers, research and development costs, continuing education and training per employee, employee turnover, and employee satisfaction. One of the best known of the performance measurement strategies that imply the existence of intellectual capital is called the balanced scorecard. It creates measures in the financial, customer, internal business process, and learning and growth areas.

Those who wish to have a more comprehensive, realistic reporting of what provides value to businesses will continue to pay attention to intangible assets.

The term intellectual capital defines a range of intangible assets that a company possesses alongside its physical and financial assets but which can't be quantified in the same manner. Among these are the intellectual property and patents claimed by the firm; its employees' and managers' collective knowledge about their products and services and about the way the firm and its market function; and the internal information infrastructure, systems, and software that enable the dissemination, sharing, manipulation, and optimization of that knowledge. The Organization for Economic Cooperation and Development (OECD) defines intellectual capital simply as "the economic value of two categories of intangible assets of a company: (a) organizational (structural) capital; and (b) human capital." Structural capital, according to Financial Management, covers supply chains, distribution networks, and proprietary software systems. While these features of businesses are not native to the New Economy, the importance they have assumed in the Information Age, in terms of the workings of the firm and its perceived value, is altogether unprecedented and rapidly escalating.

In part, the concept of intellectual capital grew out of a growing dissatisfaction among many academics, accountants, and—perhaps especially—investors with standard accounting methods, which did a poor job of assessing the actual value of firms, particularly firms operating in or around the fields of information technology (IT) or other knowledge-intensive sectors. In order to accurately assess the value and prospects of such firms, these critics contended, it was necessary to somehow quantify and account for the collective knowledge and the organization of that knowledge within a firm.

The major factors contributing to the growth and importance of intellectual capital were economic globalization, which greatly intensified global competition and trade; the trend, especially in the United States but in much of the rest of the world as well, toward the deregulation of markets, particularly in such IT-heavy sectors as telecommunications that had previously largely worked outside of the competitive market system; and, of course, the tremendous technological innovation in knowledge-related fields, particularly the growth in IT and computers, which placed information at the center of firms' operations. All these changes forced a shift in corporate organization toward a less centralized and vertical model of corporate organization, greater outsourcing of operations, and more fluid channels of interaction within and between firms, all of which enhanced the importance of intellectual capital.

Intellectual capital was a lively topic in the business literature of the early 1990s, but the idea fizzled, according to Information Today, largely on the inability of researchers to devise a satisfactory method of measuring it. Without an adequate means of quantification, the idea essentially had no way of being practically integrated into accounting methods. As a result, the issue faded into the background for several years before reemerging in the late 1990s when the Internet and information technology proved among the primary engines of the fantastic boom in the U.S. economy. While quantification techniques continued to be debated and compared, intellectual capital, an increasingly recognized asset, became a field ripe for management concerns, as companies, determined to maintain their competitiveness in an information-centered economy, required an accurate assessment of the intellectual value harbored in their ranks.

To organize and capitalize on intellectual capital, an entire field of knowledge management was born, including theoretical techniques and extensive and sophisticated knowledge management software programs that companies increasingly integrated into their infrastructure to facilitate the transfer, support, and optimal use of knowledge within the firm.

As intellectual capital grew increasingly central to a firm's operations and value, managers were compelled to take ever-greater steps to protect their intellectual capital from compromise. The task of keeping knowledge, including knowledge inside employees' heads, within the purview of the firm at all times was a growing concern in the 1990s and early 2000s. One mark of this trend was the increasing number of confidentiality agreements devised by companies for their employees to sign, thereby guaranteeing that while they work at the firm and even after they leave, they will not divulge information and company secrets to other parties.

ASSESSING VALUE IN THE INFORMATION AGE

According to Computer World, the growing difference between a company's book value share price and its market value share price is often, and increasingly, chalked up to intellectual capital. As Arthur Levitt, former chairman of the Securities and Exchange Commission (SEC) told the Economic Club of New York, "As intangible assets grow in size and scope, more and more people are questioning whether the true value—and the drivers of that value—are being reflected in a timely manner in publicly available disclosure."

Indeed, Fortune reported the results of a long-term study by Arthur Andersen consultants Richard Burton, Barry Libert, and Steve Samek, who for two decades monitored the gap between the book value and the market value of 3,500 U.S. companies. The results strongly favor those who insist that intellectual capital is being unduly, and potentially dangerously, ignored. In 1978, according to the study, book value for all the companies averaged 95 percent of market value. By the end of the 1990s, book value amounted to just 28 percent of market value. While the precipitous decline in technology stocks and the attendant slowing of the U.S. economy in the early 2000s showed some of this discrepancy to be the result of a stock-market bubble, analysts were in general agreement that no small amount of the difference could indeed be chalked up to unquantified intellectual capital. In other words, investors increasingly saw value in companies that traditional accounting methods were simply incapable of quantifying. Federal Reserve Board Chairman Alan Greenspan warned that such a gap between hard accounting data and the perceptions and confidence of investors was bound to breed tremendous problems in the future if left uncorrected.