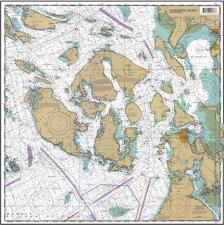 SAN JUAN ISLANDS. Approximately 172 islands make up the San Juan Islands, located eighty miles from Seattle in the northern reaches of Puget Sound. Together, they comprise San Juan County, one of the smallest but fastest-growing counties in Washington State. The islands cover 175 square miles and are home to roughly 13,000 residents. Friday Harbor, the county seat, is the islands' biggest and only incorporated town.

Native Americans, mostly of the Lummi nation, lived on the islands until Spanish explorers arrived and named the San Juans in the late 1700s. White settlers began to colonize in the 1850s. By 1859, the San Juan Boundary Dispute erupted over the boundary description between Canada and the United States, pitting the British against the Americans. After British warships arrived, Gen. Win-field Scott, commander in chief of American armies, stepped in and arranged for joint occupation on the islands. Germany's Kaiser Wilhelm I finally arbitrated the conflict in 1872, giving the San Juan archipelago to the United States and ending the last territorial conflict between the United States and Great Britain.

Historically, farmers, fishermen, and seafarers populated the islands. But by the 1970s, traditional occupations became less profitable than tourism. The San Juans in the early twenty-first century see a greater economic impact from visitors as well as from the mainlanders and retirees seeking an island alternative to city life.

Miller, David Hunter, ed. Northwest Water Boundary: Report of the Experts Summoned by the German Emperor as Arbitrator Under Articles 34-42 of the Treaty of Washington of May 8, 1871, Preliminary to His Award Dated October 21, 1872. Seattle: University of Washington, 1942.