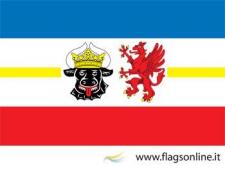 oxford
views updated
Mecklenburg-Vorpommern State in ne Germany, on the Baltic coast; the capital is Schwerin. In 1621, the region was divided into the Duchies of Mecklenburg-Schwerin and Mecklenburg-Güstrow, which became part of the German Empire (1817) and then free states of the Weimar Republic. In 1934, the two states unified. In 1946, they joined with Pomerania to form a region of East Germany. In 1990, as part of German reunification, Mecklenburg-Vorpommern reconstituted as one of the five new states of the Federal Republic. It is mainly a low-lying agricultural state. On the coasts lie the Baltic ports of Rostock, Wismar, and Sreaslund. Area: 23,170sq km (8,944sq mi). Pop. (1999) 1,789,322.

Weimar Republic , Weimar Republic Saxony-anhalt , Saxony-Anhalt Saxony-Anhalt (săk´sənē-än´hält), Ger. Sachsen-Anhalt, state (1994 pop. 2,965,000), 7,892 sq mi (20,445 sq km), E Germany. Magdeburg is… Angela Merkel , Merkel, Angela Angela Merkel (born 1954) became the first woman ever to lead Germany as chancellor. Merkel and the party she chairs, the Christian De… Germans , GERMAN Germany as a nation did not exist in minds or on the map during the early modern era. Each territory of the Holy Roman Empire of the German Na… Nakhichevan Autonomous Republic , NAKHICHEVAN As part of the Republic of Azerbaijan, the Nakhichevan Republic is located in South Asia, west of Azerbaijan proper and separated from th… United States Coast Guard , Coast Guard, U.S. The Coast Guard has existed in various forms since 1790, although its name dates from 1915. On 4 August 1790, President George Wash…