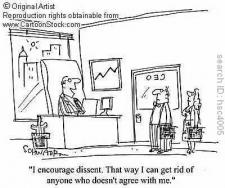 DISSENTERS, the name commonly applied in America to those who disagreed with the doctrines of the religious establishments, particularly the Church of England in Massachusetts. Dissenting bodies, or "nonconformists," splintered from established churches with increasing frequency in the late eighteenth and early nineteenth centuries. The most important dissenters were the Congregationalists, Baptists, Quakers, Presbyterians, and Wesleyans, or Methodists. Once the legal separation of church and state ended the Anglican and Congregational franchises, the ranks of the dissenters grew rapidly. Organized collectively in evangelical groups, these congregations would dominate social reform and force political realignments during the antebellum era.

Presbytery , One of the earliest, most influential, and enduring forms of Protestantism, essentially a system of ecclesiastical polity, namely, the government of… Congregationalists , The name "Congregational Church" came into general use during those transitional years when the former Puritan churches of Massachusetts and Connecti… Anticlericalism , Anticlericalism was both a widespread attitude and a deeply ingrained sentiment among Latin America's intellectual and political elites who viewed or… Brethren , Brethren Brethren Current address not obtained for this edition. The Association of Fundamental Gospel Churches was formed in 1954 by the coming toge… Isaac Backus , Isaac Backus (1724-1806), an American Baptist leader, was a major figure in New England church history and was instrumental in the eventual securing… Church Of England , Church of England, the established church of England and the mother church of the Anglican Communion. Organization and Doctrine The clergy of the chu…