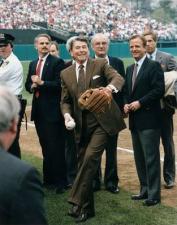 The architect of the 1984 Summer Olympic Games at Los Angeles, Peter Victor Ueberroth (born 1937) was voted 1984 "Man of the Year" by Time magazine. He was commissioner of organized baseball (1985-1989) and chairman of an effort to rebuild Los Angeles after the 1992 riots.

Peter Ueberroth was born September 2, 1937, in Evanston, IL. His mother, Laura Larson, died when he was four, and his father, Victor, a traveling salesman of aluminum siding, became the driving force in Peter's desire for learning, recognition and success. His father re-married, and the family moved often. Tall, tan, and athletic, the young Ueberroth worked his way through high school and San Jose State University, yet still found time for baseball, body surfing, basketball, swimming, football, and water polo. Despite working 30-40 hours a week to support himself, he almost made the U.S.A. Olympic water polo team in 1956.

In 1959, Ueberroth graduated from San Jose State with a degree in business. He married Ginny Nicolous and moved to Hawaii, where he got a job with a small non-scheduled airline. In two years he returned to California as part-owner of the business. Ueberroth then started his own air service between Seattle and Los Angeles. Next he began a reservation service for small airlines and hotels, Transportation Consultants. He quickly expanded into hotel management and transformed his travel business into First Travel, the second-largest travel agency in the nation. Ueberroth became a millionaire while he was still in his 30s, and by 1978 First Travel had gross revenues of more than $300 million. Ueberroth was known for being disciplined and for giving women and younger employees managerial responsibility. Despite his position, he reserved every weekend for his wife, three daughters, and son.

In 1978 the International Olympic Committee (IOC) awarded the 23rd Summer Olympic Games to Los Angeles. When that city, the state of California, and the government of the United States all announced that no public money would be spent on the international sporting festival, a frantic search for a capable manager was launched. Ueberroth won the post over hundreds of corporate executives. Though it meant a 70 percent cut in pay, to $104, 000, he accepted the job. He sold his company for $10.6 million, and then forsook the salary to become a volunteer impresario of the 1984 games. The position vaulted him into worldwide prominence.

Searching for funds, Ueberroth decided to sell the rights to broadcast the games in a blind auction. The American Broadcasting Company (ABC) paid $225 million to show the games on TV. Ueberroth raised another $150 million from foreign television corporations. Reducing the number of corporate sponsors from the 381 at the 1980 Winter Games in Lake Placid, NY, to 30, Ueberroth set an unprecedented price of $4 million for sponsorship. With Ueberroth doing the selling personally to companies such as Coca-Cola, which donated $12.6 million. The money poured in, nearly a billion dollars.

Ueberroth stretched the Olympic rules to their maximum in not building an Olympic village, but instead housing athletes at three of the area's largest university student dormitories. He raised an army of 16, 000 uniformed police and non-uniformed security personnel, plus a company of 40, 000 volunteers, to keep the games orderly. A $100 million expenditure on police, undercover agents, and security personnel kept the games free of the violence and threats that had marred many previous Olympics.

When a boycott of the games by the Soviet Union was announced, Ueberroth sent envoys to many nations to try to keep others from dropping out. He held the number of other boycotting nations to 16, and his secret meeting with Romanian officials prevented that country from bolting. Romania went on to win 53 medals, and, despite the boycott, nearly six million tickets were sold and the Olympics made a profit of $300 million, the first profit in 88 years. Ueberroth was hailed as a national hero, and some urged him to run for President of the United States. He was named Time magazine's "Man of the Year." However, some critics denounced Ueberroth for selling out the games to corporate control and running them in quasi-militaristic fashion.

Late in 1984, Ueberroth accepted the position of commissioner of professional baseball, succeeding Bowie Kuhn. One of his first acts was to restore to good standing two Hall of Fame stars, Willie Mays and Mickey Mantle, who had been banned from official baseball activities. In 1985, publicly positioning himself as the representative of fans, Ueberroth helped broker a five-year agreement between major league players and owners, ending a one-day players' strike. Ueberroth also opened the door to managerial and administrative positions for minorities, made great progress toward addressing the game's growing drug problems, and, using his well-honed business skills, reversed the financial decline of the sport, at least temporarily. When he took over, 21 of the 26 teams claimed to be losing money; none were in the red when he left the job in 1989. Under Ueberroth's regime, baseball's attendance increased, its national television revenues doubled, and its income from merchandising increased 16 times. Of his term as commissioner, baseball writer Daniel Okrent noted in Sports Illustrated: "To a job previously occupied by the ineffectual (Bowie Kuhn), the invisible (General William Eckert), the inconsequential (Ford Frick) and the incomprehensible (Happy Chandler), Ueberroth brought an authority, an effectiveness and a public visibility that matched those of Judge Kenesaw Mountain Landis, the man for whom the job was invented in 1920."

However, during Ueberroth's reign, baseball owners were found guilty of collusion in joining together to hold down player salaries during the 1985-1987 period, even as the clubs' revenues increased significantly. Ueberroth denied knowing that collusion had taken place, but many believed it was part of his game plan for profitability. Close observers of baseball's business side believed Ueberroth and the owners laid the seeds for the player-management tensions which tore apart the game in the 1990s.

Ueberroth's next challenge, starting in 1989, was to engage in attempted corporate turnarounds, with mixed success. The companies he tried to revamp included Eastern Air Lines, Hawaiian Airlines, and Adidas. His record was mixed; Hawaiian Airlines went bankrupt and Ueberroth's investor group lost $37 million. In 1992, Ueberroth flirted with a run for the office of U.S. Senator, then backed out. That same year, he was appointed volunteer head of the Rebuild Los Angeles commission, a group seeking to revitalize South Central Los Angeles after the April 1992 riots. Though getting pledges for $500 million in corporate contributions, Ueberroth failed to overcome the political roadblocks and his disadvantage of being a suburban white millionaire Republican. He resigned after 13 months on the job with the rebuilding effort a disappointment. Returning to corporate life, Ueberroth and a partner took over the Doubletree hotel chain in 1994 and brought it increased profits.