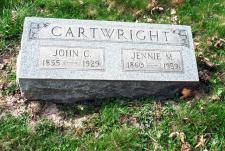 oxford
views updated
Cartwright, Major John (1740–1824). The ‘Father of Reform’ was a Lincolnshire squire who devoted the best years of his long life to radical agitation and propaganda. From support of the American colonists, Cartwright moved to a critique of the political system. His most famous book, Take your Choice (1776), argued the case for manhood suffrage, secret ballot, annual elections, equal electoral districts, and payment of MPs, by reference to Anglo-Saxon precedent, thus foreshadowing the claims of advanced political reformers until chartist times and beyond. In 1780 he founded the Society for Constitutional Information. He welcomed the first stages of the French Revolution, but did not support Painite radicalism or the London corresponding society. For some years after 1805 he was involved in the politics of the radical borough of Westminster, and from 1812 in the Hampden club movement.

Louis Blanc , Blanc, Louis BLANC, LOUIS BLANC, LOUIS (1811–1882), French socialist. Louis Blanc was the first socialist in any country to hold a government post. T… Carlstadt , Carlstadt or Karlstadt (c.1480–1541). Radical German Reformer, Andrew Bodenstein, who took his name from his birthplace in Bavaria. He became teacher… free radicals , free radicals A free radical is any chemical species which contains one or more unpaired electrons and which is capable of an independent existence.… Radicalism , The word radical has a number of meanings, one of which involves “getting to the root of the matter.” This analogy is helpful in focusing attention o… Samuel Bamford , Bamford, Samuel (1788–1872). Lancashire radical and poet. Brought up a Wesleyan in Middleton near Manchester, he worked as a warehouse boy, farm labo… Arturo Frondizi , Arturo Frondizi Arturo Frondizi (1908-1995) was a leader of the Argentine Radical party and the first legally elected Argentine president after the f…