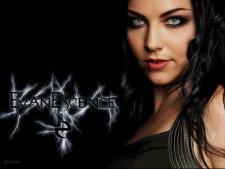 Catapulted into the mainstream by their blockbuster major label debut Fallen, Evanescence was dubbed Best New Artist of 2003 at the Grammy Awards. A rare metal-Goth combo, these musicians are fronted by a powerful soprano, Amy Lee, who spews dire lyrics that belie the airy sensation inferred in the band's name. Evading catastrophe in the unanticipated loss of keyboardist David Hodges while on international tour in October 2003, the band regrouped and reduced the disaster to a mere speed bump on the road to superstardom. With continued success, global sales of the band's multiplatinum debut album, Fallen, were reported at 11 million units in May 2004.

Evanescence began in 1995 in Little Rock, Arkansas, as the brainchild of two adolescent musicians, Amy Lee and Ben Moody, each of them aspiring songwriters. Lee, then 13 years old, was studying piano, while the 14-year-old Moody was learning guitar. Based in a mutual love of music, a friendship flourished freely between the two who became acquainted while at a summer camp. They began musical collaborations almost immediately.

Vocalist Lee, an introverted child, had developed a morose temperament after the sudden death of her three-years-younger sister when Lee was only six. This withdrawal was aggravated when her father, a soft-rock disc jockey, moved the family from their native California, relocating to Florida and Illinois before settling in Little Rock, Arkansas, when Lee was in her early teens. She began writing songs and poetry in grade school, and pursued her love of classical music by taking piano lessons in fourth grade with the ambition of performing professionally. With dedication, she continued her piano studies for nine years, through the upheaval of relocation. Likewise she joined school choirs, served as president of the high school chorus, and was a member of the Arkansas State Choir. Although she sang alto as a student, Lee was destined to make her mark professionally with her powerful, falsetto-like soprano, which became the trademark of Evanescence.

Already a loner, Lee became a rebel as a teenager. She adopted a hard-line feminist approach to life and love, and she discarded her affection for pop rock stars like Christina Aguilera. With a sincere admiration for outrageous individualism, Lee acquired a taste for grunge, metal, and mosh pits and adopted such incomparable singers as Björk and the late Janis Joplin to be her role models. Regardless it was difficult for her to nurture a credible personal image on the hardcore fringe because of her classic beauty and affinity for classical music.

As teenagers, Lee and Moody grew avid in their desire to perform. They called themselves Evanescence and taped demo tracks that received some airplay on Little Rock radio stations. On a limited basis they hired backup musicians and appeared in live performances. In the late 1990s, Lee and Moody's music came to the attention of a Wind-up Records agent on the recommendation of a sound engineer who had overheard them taping a demo at Ardent Studio in Memphis, Tennessee.

When Wind-up offered a contract, Evanescence accepted. For Lee, still in high school, it was a difficult choice and one that her parents opposed. In 2000 Wind-up sent the pair to Los Angeles to participate in an artist development program. The record label provided a residence where the artists—by then including Lee, Moody, and keyboardist David Hodges—lived together. In this program the band members learned to function as a team, and Lee attended acting classes to help her overcome her shyness.

In the fall of 2002 the band signed with The Agency Group (TAG), an artist management company that adopted a perpetual touring strategy for Evanescence. By giving the band headliner status while on tour, TAG succeeded in creating name recognition for the new group.

After several months on the road under the guidance of TAG and Wind-up, Evanescence was invited to appear on the soundtrack of the feature film, Daredevil, to which the band contributed two songs written by Moody and Lee. The first track, "Bring Me to Life," was sung as a duet by Lee and John McCoy of 12 Stones. A second song, "My Immortal," was also heard on the soundtrack. Each song later appeared on the Evanescence Wind-up debut, and each was released as a single, with both songs hitting the Top 10 on the Billboard Hot 100.

With astute managers controlling the band's career, Evanescence released a debut album, entitled Fallen, in March of 2003. Sales were spurred by the anticipation generated from the band's pre-release exposure, and Fallen spent 43 (non-consecutive) weeks in the Top 10, peaking at number 3 in June 2003. In a Billboard review of "My Immortal," Chuck Taylor called the music, "Breathtaking, potent stuff."

By the summer of 2003 Evanescence's popularity had mushroomed, and the band was a hot ticket at the international level. The group performed at the Fuji Fest in Japan, then returned to the United States, drawing crowds to the Nebraska State Fair in Omaha, and to the Q Fest in Eugene, Oregon, in August. As part of the Nintendo Fusion tour in early September, the band was seen in Seattle and at Salt Lake City's Saltair Pavilion. "[She's a] Diva of Darkness," Jim Farber said admiringly of Lee in New York Daily News, following a September Evanescence concert at Webster Hall in New York City.

In late summer 2003, Evanescence embarked on a world tour, beginning with stops in Europe and Australia. While in Berlin in October, co-founder Moody quit the band abruptly and returned to the United States without explanation or warning, leaving the rest of the group in the lurch for a lead guitarist. Accepting the demanding challenge of continuing the tour without Moody, Lee assumed control and worked with the remaining band members, which by then included Will Boyd on bass, Rocky Gray on drums, and rhythm guitarists John LeCompt and Terry Balsamo. After switching LeCompt to lead guitar and spending one week in intensive practice, Lee resumed the tour. The improvised changes proved successful, and the year ended on a high note, with the new band earning five Grammy nominations, including a nod for Album of the Year.

At the awards ceremony in early February 2004, Evanescence took two Grammys, including Best New Artist and Best Hard Rock Performance. A few days later, on February 11, the group performed at the Wittern Theater in Los Angeles, and the show earned excellent reviews. Steve Appleford in Rolling Stone gave the band a welcome thumbs up. "The Goth-metal giants overcome rock clichés and begin to find their voice," he wrote. The band logged 14 concerts in February 2004, with audiences surpassing 5,000 fans every time.

Sales of Fallen topped 11 million worldwide by May 2004, including more than 400,000 units sold in Japan, where the band maintains a large following. On extended tour in North America throughout the summer, Evanescence graduated to performing in large capacity venues, such as arenas and amphitheaters. According to a report in Billboard, Evanescence was voted the most popular act among music fans ages 13-50 in 2004. In November of that year, as Fallen sales surpassed six million units in the United States alone, Evanescence released a double disc album, called Anywhere but Home, which featured a live performance recorded in Paris and a DVD containing music videos and behind-the-scenes footage to hold fans over until a proper studio follow-up to Fallen.