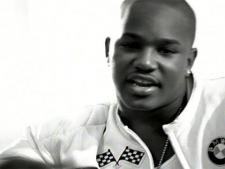 In the late 1990s, Harlem’s Cam’ron, a former hometown basketball hero turned rap artist, became one of the hottest rising hip-hop artists in the music industry. Adopting a pop-rap technique often likened to that of Bad Boy Entertainment’s Sean “P. Diddy” Combs, Cam’ron’s rhymes are confrontational and streetsmart, as well as being slick and appealing to mainstream record buyers. He has released three full-length albums: Confessions of Fire, 1998; the semi-autobiographical S.D.E., 2000; and Come Home with Me, 2002. Featured on several hip-hop compilation albums and film soundtracks, Cam’ron has worked with various rap masters such as Combs, the Notorious B.I.G., and Ol’ Dirty Bastard.

Now a resident of Teaneck, New Jersey, Cameron Giles was born in 1976 and raised in New York City’s Harlem neighborhood. Rather than music, Cam’ron grew up pursuing sports. As a student at the Manhattan Center High School for the Arts and Sciences, he excelled in athletics, developing into an All-City and All-American point guard on the basketball team alongside teammate and fellow rapper Mase. Prior to graduating, Cam’ron received scholarship offers from some of the biggest names in college basketball, among them North Carolina, Duke, Syracuse, Florida, and Southern California. But because of his poor academic standing, he was unable to play for a Division I team. He settled for a smaller school, Navarro Junior College, in Texas.

Not long after he moved to Texas, a less than satisfied Cam’ron gave up his college sports career and returned to Harlem. Back at home, he turned to hustling and drug dealing on the streets. Eventually, he turned to rap music, contributing f reestyles to mix tapes by old high school friend Mase. Together, along with the late “Bloodshed,” “Killa Cam” (as Cam’ron was then known) and “Murder Mase” established a group called Children of the Corn.

From there, Cam’ron quickly developed a reputation for his rough-yet-smooth style. “I can be hardcore one minute, slick and laid-back the next,” said Cam’ron in a biography for Epic Records that appears on the ARTISTDirect website. “I’m doing it all trying to set trends, not follow them.” The now-deceased Notorious B.I.G., introduced to Cam’ron by Mase, likewise recognized the aspiring rapper’s talent. “At the time I met Biggie, he was working on Life after Death, so he had all sorts of fly tracks around his apartment,” Cam’ron recalled. “He flipped on about twelve or thirteen beats, and I flowed to every one of them. Big said, ‘yo, you nice, I wanna sign you!’”

The Notorious B.I.G. immediately called his partner, Lance “Un” Rivera, who signed Cam’ron on the spot to his new Untertainment label, distributed by Epic Records. Prior to recording his own material, Cam’ron introduced himself by writing hip-hop songs for some of the genre’s most popular artists. One such song, Li’l Kim’s “Crush on You,” became a platinum-selling single.

After earning airplay for his own single, “Pull It,” in May of 1998, Cam’ron emerged again for cuts on two movie soundtracks. The first was a track with Lil Cease for How to Be a Player entitled “Casanova,” followed by “3-5-7,” featuring rap star DMX, for the film Woo. The latter song provided Cam’ron with his first entry into the Billboard R&B chart in June of 1998. Subsequently, in July, Cam’ron returned with the single “Horse and Carriage,” featuring Mase. With this effort, Cam’ron rose into the R&B top ten and just missed entering the Billboard Top 40.

Meanwhile, back in late 1997, Cam’ron commenced work on his debut solo album, Confessions of Fire. During the first few months of recording, admits Cam’ron, he experienced difficulty because he lacked experience writing in the studio. But by the time eight months had passed, during which time a dedicated Cam’ron worked and practiced almost every day, the rapper felt confident about the completed project. “I was just trying to show people that I can rap,” Cam’ron told the Hip Online website about his debut effort. “Back then, I was just showing everybody that I’m multi-talented and that I can flip any style.”

Released in the summer of 1998 and including the previously released tracks “3-5-7” and “Horse and Carriage,” Confessions of Fire confirmed Cam’ron’s selfassured attitude. Sounding at once commercially appealing and true to street life, the album featured

Introduced by the release of two more hit singles—“What Means the World to You” and “Let Me Know”—Cam’ron’s sophomore effort saw release in September of 2000.S.D.E., standing for “Sports, Drugs, and Entertainment,” also showcased the rapper’s stylistic versatility, including a range of witty and danceable songs. “Cam’ron proves that he’s a versatile rapper with staying power,” stated a review for MTV.com. Los Angeles Times critic Soren Baker concluded: “The Harlem rapper’s second album features a winning combination of potent, spine-tingling production and entertaining storytelling…. Cam’ron uses an awkward, offbeat rhyming style that works wonderfully throughout the 19 songs.”

Cam’ron’s second album featured personal tales of struggle. “My sports got me into college,” he told Hip Online. “College didn’t work out. Got into drugs and then I ended up rapping. It ain’t phony. I lived this.” With S.D.E., Cam’ron again surrounded himself with talented and popular guests, among them Destiny’s Child (“Do It Again”), Wu Tang Clan’s Ol’ Dirty Bastard (“Violence”), and Prodigy (“Losin’ Weight”). The record was produced by Branch, Poke & Tone, Ron G., and Grease, with engineering credits going to Black, Joe Quinde, and Kevin Grouse.

Switching to a new label, Cam’ron returned a year and a half later, in May of 2002, with a third album entitled Come Home with Me. Untertainment had folded just prior to the release of S.D.E.; Cam’ron, believing the smaller Roc-A-Fella label (run by Cam’ron’s manager, Damon “Dame” Dash) was a better fit with his music, decided to leave Epic Records.

Like S.D.E., Come Home with Me contains tracks based on personal experience such as “On Fire Tonight,” about the importance of using condoms, and “Welcome to New York City,” providing lessons on street life to the unfamiliar and featuring a guest appearance by hip-hop star Jay-Z. Cam’ron’s production team for the project included Ty Fyffe, Just Blaze, Precision, Ray Watkins, and LeLan Robinson, while Eric “Ibo” Butler, Gimel “Young Guru” Keaton, and Mike T served as engineers. According to an MTV.com review, “The production is a mix of 70s and ‘80s samples and brutally simple, down-and-dirty beats, giving the whole enterprise a grainy feel that’s a world away from the big-pimpin’ efforts of many of Cam’ron’s peers.”


Harlem-based rapper Cam'ron's streetwise yet witty rhymes and edgy charisma seemed to mark him as the late 1990s heir to one of his earliest mentors, fellow New York MC the Notorious B.I.G. (alternately known as Biggie Smalls). He made his solo debut in 1998 with an album delivering the polished, pop-friendly rap then enjoying prominence thanks to another Cam'ron ally, producer and rapper Sean "Puff Daddy" Combs. Label difficulties, however, stalled Cam'ron's career, and he would have to wait until the early twenty-first century for major success.

Born in Harlem, Cameron Giles attended Manhattan Center High School, where he played on the basketball team with future hip-hop star Mason "Ma$e" Betha. Although his basketball skills were enough to earn him college scholarships, his poor academic record led him to a small school in Texas. He soon dropped out and returned to Harlem, where he became a drug dealer for a time before encountering Betha again and beginning to pursue a rap career. Adopting the name "Killa Cam," Giles and his cousin, Derek "Bloodshed" Armstead, joined Betha and another neighborhood rapper, Lamont "Big L" Coleman, to form the group Children of the Corn. When the death of Armstead in a car accident prompted Children of the Corn to disband, the remaining members began pursuing solo careers. In 1995 Big L became the first to succeed, and he featured Giles, then still known as Killa Cam, on a track on his debut album. It was Ma$e, however, who provided Giles with the break that launched his career.

In 1996 Ma$e had signed with Combs's Bad Boy label, home to one of the time's most popular and respected rappers, the Notorious B.I.G. In 1997 Ma$e got Giles an audition with the Notorious B.I.G., who was impressed enough to introduce Giles to his partner, Lance "Un" Rivera. Cam'ron, as he was by then known, became the first artist signed to Rivera's Untertainment label.

Cam'ron got his first airplay in May 1998 with "Pull It," a collaboration with rapper DMX. He followed this with "357," a track from the soundtrack to the movie Woo (1998) that wrapped Cam'ron's boasts of his drug-dealing past around a catchy sample of the theme song to 1980s television drama Magnum P.I. While "357" barely cracked the R&B/hip-hop charts, Cam'ron's next single, the Latin-tinged "Horse and Carriage," became a Top 10 R&B/hip-hop hit in the summer of 1998. Reteaming Cam'ron with Ma$e, the track introduced listeners to the menacing yet tongue-in-cheek bravado that characterized the debut album from which it was taken: "Aiyyo, you might see Cam in designer underwear / New reclining leather chair, reminders everywhere / How we pull up in whips, the minors stop and stare."

In June 1999 Cam'ron released "Let Me Know," the first single from his second album, S.D.E., which stands for "Sports, Drugs, and Entertainment." Just before S.D.E. was to be released, Untertainment lost its distribution deal with Epic, causing the album to be shelved for more than a year. S.D.E. debuted in September 2000 to little fanfare. In 2002 Cam'ron signed with Jay-Z-led industry powerhouse Roc-A-Fella records, which put out his third album, Come Home with Me, in May of that year. Come Home with Me became Cam'ron's biggest success to date, spawning a series of Top 40 hits and going platinum.

Well-connected supporters such as Ma$e and the Notorious B.I.G., along with a knack for combining gritty street-oriented attitude with shrewd pop savvy, allowed Cam'ron to make a bid for hip-hop stardom in the late 1990s. Although Cam'ron's 1990s career failed to make good on his early promise, it set the stage for his success in the early 2000s.