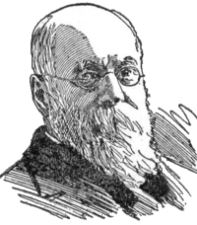 The American journalist Charles Anderson Dana (1819-1897), as editor of the New York Sun in the late 19th century, created the first modern newspaper.

Charles A. Dana was born on Aug. 8, 1819, in the small country town of Hinsdale, N.H., the son of an unsuccessful country storekeeper. When the family moved to upstate New York, Charles went to work in an uncle's general store in Buffalo. During the Panic of 1837, the store failed, and at the age of 18 Dana found himself with $200 saved but without a job. Luckily, he had spent much of his youth educating himself and had learned enough Greek and Latin to pass the entrance exams for Harvard College.

Dana attended Harvard for 2 years but was forced to leave because of failing eyesight and lack of money. An interest in the ideas of Charles Fourier, the French utopian socialist, led Dana to join the major Fourierist experimental community in the United States, Brook Farm in West Roxbury, Mass. Dana lived and worked there happily for 5 years until the community was disbanded after a fire. Because he had done some writing at Brook Farm, Dana gravitated toward journalism and in 1847 became city editor of Horace Greeley's New York Tribune.

In 1862, after a 15-year association, Dana and Greeley had a major falling-out and Dana was fired. The Civil War was raging, and Dana went to work for the Union government in various capacities, rising to assistant secretary of war under Edwin Stanton. He left the government in 1865 to become editor of a short-lived Chicago paper and then raised enough money among prominent Republicans in New York City to buy the failing New York Sun.

As editor, Dana rapidly transformed the Sun. Before the Civil War the prime "news" function of a newspaper had been to promulgate the editor's political opinions, but the dramatic firsthand accounts of battles during the Civil War had brought the news correspondent to prominence. In the Sun this trend was reinforced. Although Dana continued to expound his political beliefs on the editorial page, the emphasis in the paper became accurate, lively news stories. This approach contrasted with that of most American newspapers, which continued to imitate the turgid, third-person, literary style of the London Times. Dana also began running "human-interest" stories, which focused on the pathos or humor in the lives of ordinary people. Because of their popularity, human-interest stories became a hallmark of modern journalism throughout much of the world.

Dana's Sun was an immediate success, and it dominated New York journalism for about 15 years. However, his erratic political views worked against the newspaper. He was generally a Republican and continually attacked the New York City Democratic machine, but in national politics he frequently could not bring himself to support the Republican candidate. His failure to support either presidential candidate in 1880 cost him considerable circulation and prestige. Shortly thereafter, the founding of Joseph Pulitzer's popular New York World cost even more in circulation. When Dana died in 1897, the Sun remained "a newspaper-man's newspaper," but it had been displaced for the man in the street by the more sensational representatives of the new "yellow journalism," the Hearst and Pulitzer papers.

James Harrison Wilson, The Life of Charles A. Dana (1907), is a sympathetic biography, but Charles J. Rosebault, When Dana Was the Sun (1931), is livelier and more colorful. The best serious study of Dana's ideas is Candace Stone, Dana and the Sun (1938). There are interesting sections on Dana in Frank M. O'Brien, The Story of the Sun, New York, 1833-1928 (1918; new ed. 1928); Willard Grosvenor Bleyer, Main Currents in the History of American Journalism (1927); and Kenneth Stewart and John Tebbel, Makers of Modern Journalism (1952). □