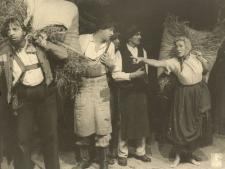 The works of the German dramatist and novelist Hermann Sudermann (1857-1928) reflect both the scope and the limitations of naturalism.

Hermann Sudermann was born in Matziken, East Prussia, on Sept. 30, 1857. He described his youthful poverty in Das Bilderbuch meiner Jugend (1922). He found initial success in Berlin with his novel Frau Sorge (1887), in which an East Prussian farmer triumphs over poverty and other vicissitudes through dedication to hard work, self-reliance, and self-sacrifice.

More directly in the stream of naturalism was Sudermann's four-act drama, Die Ehre, produced in November 1889. It treats of class conflict and the relativity of the concept of honor, contrasting the rich, dwelling in the "front of the house, " with the humble occupants of the "rear of the house." Without glorifying the latter, Sudermann defends the viability of bourgeois principles and a persistent idealistic sense.

The structural symmetry of Die Ehre—not a characteristically naturalistic technique—is present also in Sodoms Ende (1890), a drama depicting the society of Sudermann's artistic colleagues as an amoral morass fraught with tragedy and death. In Heimat (1893) Sudermann defends the cause of women in their struggle against the pressures of tradition and parental authority. Das Glück im Winkel (1896) echoes in a country setting the moral bankruptcy of Sodoms Ende, but the victimized woman is preserved from tragedy by her understanding and forgiving husband.

The one-act play Fritzchen (1897) effectively develops the familial complications for the young officer who transgresses the traditional code, while Johannisfeuer (1900) opposes the natural and passionate affinity of two young people to the requirements of material expediency, regretfully resolving the dilemma in favor of the latter. Stein unter Steinen (1905) is authentically naturalistic in presenting the problem of social rehabilitation faced by the released convict and the unmarried mother.

Sudermann's novel Das hohe Lied (1908) is notable for its ruthless exposure of depravity in Berlin society as well as for its analysis of the capital's artist colony. In the narrative collection Litauische Geschichten (1917) Sudermann realistically portrays scenes and characters of his East Prussian homeland. He died in Berlin on Nov. 21, 1928.

Notable in Sudermann's work is the occasional gleam of optimism amid the encircling gloom of naturalism. Even the most sorely oppressed may win out through an unusual effort of will. In treating the newer sociological themes, Sudermann as a dramatist retains certain effective traditional techniques: a combination which makes for more effective theater than strict naturalism would provide, and assures for the plays a degree of continuing interest. A number of works, Heimat among them, have been successful as films.