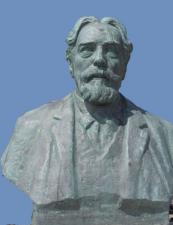 The Belgian painter and graphic artist James Ensor (1860-1949) populated his works with masks, skeletons, and grotesque images of humanity. A sense of existential anxiety dominates his fantastic personal visions.

I was born at Ostend, on Friday, April 13, 1860, the day of Venus. At my birth Venus came toward me, smiling, and we looked into each other's eyes. She smelled pleasantly of salt water." In this imaginative recollection of his birth, James Ensor also described the duality of his art: on the one hand, the fantasies of a humanistically inclined imagination; on the other, the pleasures and terrors observed as a child living in a somber Belgian town whose existence was threatened by the same sea which was its source of life. Before beginning art studies at the Brussels Academy in 1877, Ensor painted the landscape surrounding Ostend— small houses isolated in vast light-flooded spaces. At the academy he began painting imaginative, rhetorical themes; under the influence of Dutch baroque painting and French impressionism he started using a free, divided brushstroke.

After 3 years of study Ensor returned to Ostend to the attic studio above his parents' souvenir shop; he spent the remainder of his uneventful life in Ostend. Using heavy, impasto pigments, he depicted the middle-class interiors in which his family lived. A somber, disquieting air of mystery surrounds the isolated figures as they drink tea, listen to piano music, or sit in melancholy introspection.

In 1883 Ensor became a founding member of the Belgian avant-garde artists' group Les XX, which brought works by contemporary French artists to Brussels and fought for increased artistic freedom from the dictates of official taste. From 1883 until 1887 Ensor painted little but evolved the overtly fantastic images with which his art is generally associated. The carnival masks of Ostend surrounding him in his studio made their appearance in Scandalized Masks (1883) and Haunted Furniture (1885; destroyed) and were joined by numerous skeletons bringing psychotic horror and terror into the bourgeois interiors. The life and temptations of Christ, depicted with the features of the artist, became the subject matter of numerous drawings in 1886; he developed these motifs in his first etchings that year. He created 133 prints, most of them during 1885, 1889, and 1895-1899.

In the etching The Cathedral (1886) Ensor first explored the theme of a mocking, destructive, roving mob. His most noted painting, the Entry of Christ into Brussels (1888), depicts raucous carnival crowds escorting Christ-Ensor into the city, which is decorated with Socialist banners and advertisements for mustard. The massive canvas is a caustic commentary on contemporary Belgian political, artistic, and social values. Even Les XX refused to exhibit it, and during the following years this group continued to reject his controversial work.

Probably Ensor's unique use of Christian imagery rather than his unorthodox painting technique with its impasto surfaces, slashing brushstrokes, and depersonalized images caused his works to be disclaimed by academic and "free" artists as well as by critics. By identifying himself with Christ, Ensor transformed accepted biblical imagery into personal observations on the universal conflicts of innocence and evil, as well as private attacks on his critics; opposition to his own symbolic art thereby became equated with the tortures of Christ's Passion.

After 1900 Ensor's imagery became tamer, more a parody than a condemnation of society, perhaps a reflection of the esteem he finally gained in official art circles. To his achievements as a painter, he added those of a writer of essays and plays, reflecting the world of his paintings and prints. A greatly respected and honored citizen of Ostend, Ensor died on Nov. 19, 1949.