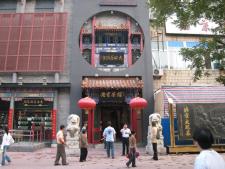 Lao Shê (1899-1966) was the pen name of the Chinese novelist Shu Ch'ing-ch'un. The prolific output of this humorist, patriot, and realist also included poetry, several volumes of short stories, and many plays.

Of Manchu descent, Lao Shê was born in Peking (now Beijing). His family could not have been well off, since he was never formally enrolled in a college, though for a short period he registered for courses at Yenching University. In 1924, after teaching Chinese for some time at Nankai Middle School in Tientsin, he left for England to teach his native language at London University's School of Oriental Studies.

Once abroad, Lao Shê studied English novels primarily to improve his command of the language; Dickens so appealed to him that he wrote a comic novel in imitation of Nicholas Nickleby, entitled Lao Chang ti chê-hsüeh (The Philosophy of Lao Chang). The novel was accepted by the leading literary journal in China at the time, Hsiao-shuo Yüeh-pao (The Short Story Magazine), which serialized it in 1926. Soon after, the magazine serialized Lao Shê's second and considerably more comic novel, Chao Tzu-yüeh. The hero of the title, a gullible youth in pursuit of honor and glory, is eventually saved from his course of dissipation by turning patriot. Patriotism plays an even larger role in the author's third novel, Erh Ma (The Two Mas), a fine study of the contrasting reactions of a Chinese father and son residing in London to the fact of national humiliation.

From his return to China in 1930 until the outbreak of the Sino-Japanese War in 1937, Lao Shê produced four more novels, including Mao-ch'eng chi (1932; The City of Cats), a most savage indictment of China's decadence and corruption in the form of a Martian fable; Li-hun (1933; Divorce), a comic study of petty bureaucrats in Peking unable to act on their own; and Lo-t'o Hsiang-tzu (Camel Hsiang-tzu; better known to Western readers as Rickshaw Boy), a tragic study of individualism in the doomed strivings of the proletarian hero. This novel, written on the eve of the war, has been generally regarded as the author's masterpiece.

During the Sino-Japanese War, Lao Shê served as the president of the Chinese Writers' Antiaggression Association. His work in behalf of national resistance deserves praise, but in willingly shouldering the task of propaganda, he appears to have abandoned his critical attitude toward China to affirm a superficial patriotism in several wartime plays and the novel Huo-tsang (Cremation). This is also true of his postwar novel in three parts, Ssu-shih t'ung-t'ang (Four Generations under One Roof), which details the lives of patriots and traitors in Japanese-occupied Peking.

Lao Shê arrived in the United States in April 1946 at the invitation of the State Department and stayed until October 1949. By that time the Communists were in full control of mainland China, and Lao Shê had no choice but to return. He remained for years an important figure in the Communist cultural hierarchy and wrote many plays, of inferior merit, about the reformation of Chinese land and people under Communist benevolence. He gave every indication of being a loyal supporter of the Peking government, but his egregious form of flattery, so exaggerated in its denunciation of the state's enemies, may have been a form of oblique satire. In any event, by the summer of 1966, when the cultural revolution began with the massing of Red Guards in Peking, Lao Shê was one of the first writers and intellectuals to meet their fury. He ended his life in September of that year.