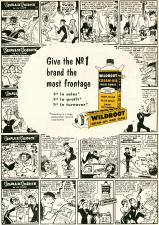 Creator of "Li'l Abner," one of the most popular comic strips of all time, Al Capp (1909-1979) was also a satirist of remarkable talent.

Capp was born Alfred Gerald Caplin in New Haven, Connecticut, on September 28, 1909. Twelve years later he lost most of his right leg in a streetcar accident, an event which did not interrupt his progress as a student of drawing—self-taught in his early days. Capp married Catherine Wingate Cameron in 1929 while he was wending his way through a chain of art schools. After working for other cartoonists, Capp launched his own strip in 1934, succeeding on his first try. "Li'l Abner" was carried by only eight newspapers at the outset but soon became wildly popular. Before long it was giving Capp a yearly income of 150,000 solid gold depression-era dollars.

Set in the mythical hillbilly village of Dogpatch, with excursions to such places as Lower Slobbovia, "Li'l Abner" chronicled the adventures of a 19-year-old male of limited intelligence but much brawn who was relentlessly pursued by the beauteous Daisy Mae. Thanks to reader demand she caught up with him in 1952, when they were finally married. Other celebrated characters in the strip included Hairless Joe; Lonesome Polecat, distiller of the infamous "Kickapoo Joy Juice"; seductive Moonbeam McSwine; and the piteous Joe Btfsplk, whose life was lived beneath a cloud that perpetually rained down misfortune. Another creation, Evil-Eye Fleegle, possessed the dreaded triple whammy, a phrase that passed into the language. Perhaps his most unusual character was the shmoo, a ham-shaped but lovable herbivore that regularly fell dead at the feet of human beings, oven-ready and delectable. Sadie Hawkins Day (when women asked men for dates), an important event in the Dogpatch calendar, was observed not only in Capp's strip but at thousands of high schools and colleges.

Many Capp characters were loosely based on well-known personalities. Marryin' Sam bore some resemblance to New York City Mayor Fiorello LaGuardia. One Fault Jones reminded readers of President Herbert Hoover. By the 1950s, when Capp's strip reached its apex, even the names were similar. The columnist Drew Pearson was mocked as Drusilla Pearson. Secretary of State John Foster Dulles was immortalized as John Foster Dullnik. Capp's great popularity in the 1950s owed much to his deft social and political satire. Liberals particularly relished his sendups of Eisenhower appointees and his cartoon war against McCarthyism. Everyone who read the "funnies" delighted in his parodies of other comics, the most famous being his strip within a strip, "Fearless Fosdick," inspired by Chester Gould's "Dick Tracy."

Capp's strip generated many by-products, as "Li'l Abner" became a motion picture in 1940 and a Broadway musical comedy hit in 1957. It was followed by a film of the musical comedy in 1959. There were also numerous published collections of his work. Together with the strip itself, which was carried by more than 900 newspapers at the height of his reputation, Capp's ventures earned him more than half a million dollars annually.

During the 1960s Capp became blatantly conservative. He also began to take himself more seriously—too seriously many thought—as a champion of traditional values. Senator Phogbound gave way to Joanie Phoanie—a character based on the liberal folk singer Joan Baez—while such organizations as Students for a Democratic Society were lampooned as S.W.I.N.E., Students Wildly Indignant about Nearly Everything. Although the number of papers carrying his strip declined as a result, Capp developed a second career as, oddly enough, a speaker at college campuses. Student organizations were willing to pay his very high fee (for the times) of $3,000 despite, or because of, the verbal abuse with which he showered them.

"The more I see of students," he once remarked, "the more I dislike them." He compared students to Nazi Brownshirts and attributed the spread of campus disorders to official leniency. When students "rip up one campus and all that happens is that their right to use the ice-cream bar machine is revoked for one hour, what do you expect?" Yet he appeared to enjoy these encounters, during which students would jeer while he delivered such observations as: "A concerned student is one who smashes the computer at a university, and an apathetic student is one who spends four years learning how to repair that computer." When asked if marijuana should be legalized, Capp said, "by all means. Also murder, rape and arson—then we could do away with all crime."

After four students at Kent State University were killed by a National Guard unit during a 1970 demonstration Capp expressed sympathy for the guardsman. At the same time, in an apparent effort to justify his view, he noted that the only students who were afraid to appear at their own college graduations were David and Julie Nixon Eisenhower.

In 1971 the fun came to an end when Capp pled guilty to the charge of attempted adultery when a woman student accused him of propositioning her. He subsequently gave up the talk-show and campus lecture circuits, becoming something of a recluse. Six years later he gave up "Li'l Abner" as well, explaining that for several years he had been losing his edge. "Oh hell, it's like a fighter retiring. I stayed on longer than I should have." He died on November 5, 1979, at the age of 70.

Whether he was a patriot or a betrayer of liberal principles, Al Capp deserves to be remembered not for his politics but, in the words of one news magazine, as "the Mark Twain of cartoonists."

Capp's memoirs, My Well Balanced Life on a Wooden Leg, was published in 1991, 12 years after his death. Obituaries appeared in The New York Times on November 6, 1979, and in TIME magazine's issue of November 19, 1979. TIME published an overview of his career at the time of his retirement in its issue of October 17, 1977.