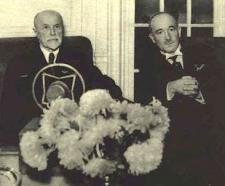 oxford
views updated
Beneš, Eduard (1884–1948) Czech statesman, president (1935–38). A follower of Tomás Masaryk, Beneš promoted Czech independence while abroad during World War I, and became Czechoslovakia's first foreign minister (1918–35). He resigned (1938) from the presidency in protest against the Munich Agreement. Re-elected in 1946, he resigned again in 1948 after the communist takeover.