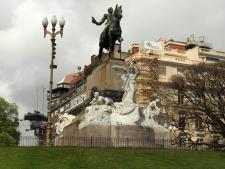 Bartolomé Mitre (1821-1906) was Argentina's first constitutional president and the leading historian of the country.

Son of a middle-rank Buenos Aires military officer, Bartolomé Mitre grew up in the disturbed era when dictator Juan Manuel de Rosas ruled Argentina. His father's changing assignments and the instability of the times prevented Mitre from receiving much formal education, but from his early years he showed a strong attachment to books and studies.

The family moved to Montevideo, Uruguay, and Mitre entered a military academy there. As a cadet, he fought in the recurring civil wars. More importantly, he joined the circle of exiles called the Generation of 1837, which sought the ouster of Rosas. Still in his teens, Mitre wrote poetry, literary criticism, essays, and drama, as well as polemical articles against Rosas. Political turmoil in Montevideo forced his departure, and he lived briefly in Bolivia and Chile, earning his living as a journalist. He finally returned to Buenos Aires in 1852, a member of the army which overthrew Rosas.

Mitre rapidly climbed to eminence in Argentina. The defeat of Rosas did not bring immediate stability, as leading figures disagreed over the form and content of the new government. Mitre leagued himself with those called porteños, who insisted that the great port city of Buenos Aires must have the leading role in controlling the nation. Others, the provincianos, wanted a government free from porteño influence. During a decade of strife Mitre's influence grew, and finally in 1861 he led the porteño army in victory over the provincianos in the battle of Pavón. For the first time since gaining independence from Spain, Argentina was a unified nation under one government. In 1862 Mitre was chosen as first constitutional president of the Argentine Republic.

Mitre set about the task of nation building— constructing a central government, providing for schools and courts of law, promoting railroads and roads, and improving commercial and fiscal affairs—attempting to remedy 50 years of national neglect. Unfortunately, his administration was plagued by a costly war with Paraguay which slowed national progress. Mitre was frequently absent from his capital, personally commanding the army. His 6-year term ended with many difficulties unresolved.

Still young and vigorous, Mitre served several terms in Argentina's legislature, undertook crucial diplomatic missions, and founded a leading newspaper, La Nación. He also pursued a primary interest, the writing of history. Believing that history must be based on extensive research and documentation, Mitre strove to tell his stories with as much accuracy as possible. He felt that a true portrayal of the glories of Argentina's past would spur coming generations to even greater accomplishments. His major efforts were the still useful multivolume biographies of the independence figures Manuel Belgrano and José de San Martín.

The best biography of Mitre in English is William H. Jeffrey, Mitre and Argentina (1952). Myra Cadwalader Hole, Bartolomé Mitre: A Poet in Action (1947), delves into the personality of Mitre, using his correspondence extensively. A penetrating analysis of Mitre's place in Argentine history is found in Donald E. Worcester, Makers of Latin America (1966).