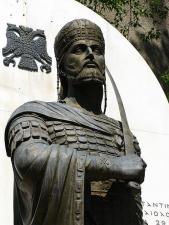 Constantine XI (1405-1453) was the last Byzantine emperor. A gallant prince, he completed the conquest of the Peloponnesus from the Latins and heroically commanded the futile defense of Constantinople against the Turks.

The fourth son of Emperor Manuel II Palaeologus (reigned 1391-1425), Constantine was born on Feb. 8, 1405. Following the Palaeologan custom of apportioning territorial responsibilities to each member of the reigning family, as a young man Constantine was assigned authority in the Black Sea coastal towns. His eldest brother, who had always favored him, became Emperor John VIII in 1425.

In 1427 Manuel's second son, Despot Theodore II of the Morea, announced his decision to resign his power in this important Peloponnesian territory. The Emperor designated Constantine to take Theodore's place. When Constantine arrived, however, Theodore had changed his mind. It was then agreed that Constantine should renew Byzantine efforts to conquer the areas of the Peloponnesus still in Latin hands, thus making an enclave for himself. He attacked Glarentza and finally won the city in 1428 by marrying the ruler's niece. By 1430 Constantine had conquered Patras and thus controlled the northern Peloponnesus. Two years later his younger brother Thomas annexed the last segments of Achaea, thereby placing all of the Peloponnesus in Byzantine hands for the first time since the Fourth Crusade (1204).

While John VIII attended the Council of Ferrara-Florence from 1437 to 1440, Constantine served as regent in Constantinople. During the following years he presided over what was to be the final flowering of Byzantine unity and prosperity in the Peloponnesus. At John VIII's death at the end of 1448, Constantine succeeded to the imperial throne. He proceeded cautiously regarding the hated agreements for Church union with the Latins, which John had accepted at Florence in hopes of winning Latin aid but which he had never implemented. Finally, under pressure from Rome, Constantine allowed the union to be proclaimed in Hagia Sophia on Dec. 12, 1452. This act greatly antagonized the bulk of his subjects, while it actually won him little effective help from the Latin West.

With only token help from outside, Constantine had to face the empire's last agony, as the Turkish sultan Mohammed II launched his great siege against Constantinople in early April 1453. The Turks finally broke into the city on May 29, 1453. Constantine died bravely during the ensuing sack.

The only biography of Constantine is Chedomil Mijatovich, Constantine: The Last Emperor of the Greeks (1892), which is out of date. For material on Constantine in the Peloponnesus see William Miller, The Latins in the Levant: A History of Frankish Greece, 1204-1566 (1908). His central role in the final siege is discussed in Edwin Pears's old but still admirable The Destruction of the Greek Empire and the Story of the Capture of Constantinople by the Turks (1903); Steven Runciman's newer but less satisfactory The Fall of Constantinople, 1453 (1965); and David Dereksen, The Crescent and the Cross: The Fall of Byzantium, May 1453 (1964).

Anna Comnena , Excerpt from The Alexiad Published in The First Crusade: The Accounts of Eyewitnesses and Participants, 1921 "Alexius was not yet, or very slightly,… Gallus , Gallus Gallus (Caius Vibius Trebonianus Gallus) (găl´əs), d. 253 or 254, Roman emperor after 251. He fought in the eastern campaign that proved fatal… Lucius Septimius Severus , Lucius Septimius Severus (146-211) was a Roman emperor. His reign is notable for the militarization of the government, growing Oriental influences in… Flavius Ricimer , Flavius Ricimer Flavius Ricimer (died 472) was a Romanized German political chief and the central power in the Western Roman Empire in the mid-5th ce… Yellow Emperor , Nationality/Culture Alternate Names Appears In The Shiji Lineage Character Overview In Chinese mythology , Huang-Di (pronounced hoo-arng-DEE), also k… Haile Selassie , Haile Selassie 1892–1975 Former Ethiopian emperor On June 30, 1936, a short, seemingly frail man wrapped in a long, black coat addressed the League o…