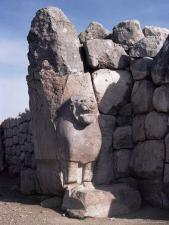 city in turkey on the site of the probable hittite capital in central anatolia.

Known as Hattushash (or Pteria, in Greek), today's Bogazköy was built over a site first inhabited by Hittites in the third millennium b.c.e. It was a major trading town and became the Hittite capital in the second millennium b.c.e. Thousands of clay tablets impressed with cuneiform writing have been excavated. The Hittite kingdom was extended into Syria, where a famous battle was fought with the Egyptians at Qadesh (near today's Homs) in 1285 b.c.e. By 1200 b.c.e., the Hittite Empire was destroyed by migrating tribes known as the "sea peoples."

Qumran , Qumran QUMRAN , region on the northwest shore of the Dead Sea, which has become famous since 1947 as the site of the discovery of the *Dead Sea Scrol… Empress Of Rome Livia , 58 b.c.e . - 29 c.e. Unsettled Life. Livia was born into a patrician family with a long history of active political involvement. In 43 or 42 B.C.E.,… Cimmerians , CIMMERIANS Cimmerians are a nomadic, Iranian-speaking peoples who occupied the North Pontic steppe zone from the Don to the Danube, with their center… Metalwork , Early Sumerian Metalwork. Evidence of metalwork in certain periods of Mesopotamian history is lacking. Because there are no natural deposits in the r… Sargon Ii , 721–705 b.c.e. Assyrian king Sources Usurper. In 722 b.c.e. Sargon, whose Akkadian name (Sharrukin) means “the king is legitimate,” overthrew the Ass… Elam , Elam ELAM (Heb. עילם, ' eylam; Elamite halhatamti; Akk. Elamtu), region on the edge of the southwestern part of the Iranian plateau, modern Khuzistan…